It’s raining like crazy and I’m feeling like some insane English lady, pruning my roses while wearing my wellies.

At first I was bummed, thinking the only reason it rained this weekend was so I would tackle some much neglected house work. But then I realized they invented rain gear for a reason. After dawning slicker and all, I put down the weed cloth for the dug out side, poured bark over it. Then guilt got the best of me and I decided I needed to finally plant the Russian Sage. Then when it was really raining I decided to put some of the hens and chicks into the ground. And then of course when it was absolutely pouring and I’d taken a mud bath from crouching on our front slope, I decided to tackle the rose bush: cut off all of the black spotted leaves, cut more dead limbs off, scratch a measly amount of fertilizer toward its roots. Its a pretty little plant. A new 12” shoot is growing next to the main trunk and the whole shoot- trunk and leaves is bright pink, very bizarre to this gardening novice.

God, maybe I will become one of those people who goes gaga over hybrid teas. I would love to know what this particular plant is, and now I am determined to save the thing.

Guilt of what I did not get done this weekend:

•   clean out the side garden next to the shed that now has those damn Himalayan blackberries creeping into from the back neighbors.

•   Plant rest of seeds – including sunflowers and mexican vegetables.

•   Finish moving/cleaning up the heap, top off the composter.

But this is what I did. Some people travel near and far on their vacations, and I am here.

•   dug, deturfed and barked the bed next to the house.

•   witnessed the English Laurel getting hacked into control (okay, so I just watched, but it is finally done).

•   weeded around a lot of the plants. Most everything looks like it is not currently dying, which is a hopeful sign. The tree guy told me my witch hazel is going to get too big and I should move it. Sigh. The whole reason I planted it where it is, is to prevent winter depression. If I move it is will not be able to do its job as I will not be able to see it.

•   trimmed grass where no weed whack fears to tread. With kitchen scissors much to Ben’s chagrin.

•   put blueberry plants into ground and some dahlias to boot. Well so I did plant some dahlias, but not the ones out front as I had hoped.

•   composter. I have the composter ¾ full, but now I’ve run out of brown material (dry leaves). I was doing this insane meditative sorting thing Friday evening, separating greens, dirt and rock. Can’t see keeping that up with any sort of regularity.

Lithodora diffusa- why did this plant die right off the bat? I dug it up and the roots were totally compact. I pulled them apart and put it back in the ground with fertilizer.

Painter Joan Mitchell with her sunflowers 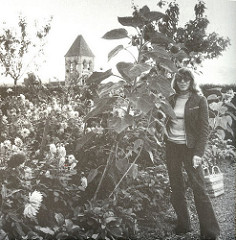