This work originated when I made a drawing on the fourth anniversary of my first husband’s passing and it inspired an entire body of work titled Flight Maps.

While first making this work I lived in the flight path of Seattle to Seatac airport. At night I sat in my backyard, looking up at a consistent formations of planes going up in the sky, softly glowing into the darkness with their engines were muffled by sound compliance. I imagined that is perhaps how people leave this earth after passing.  I envisioned the interior of these planes, with slumped over passengers and thought maybe this is how people quietly leave the earth. 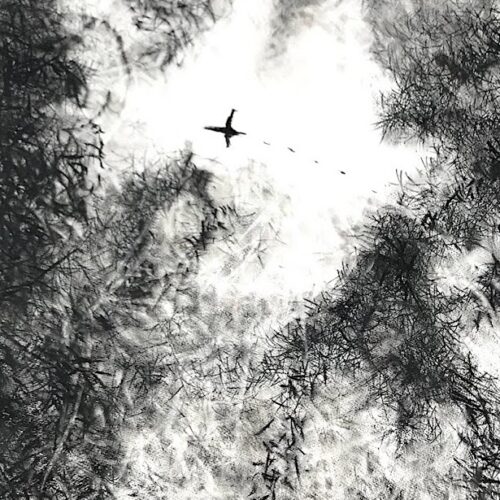 The large Flight Maps drawing is based on an old Pan Am flight path map I tracked down. The marks become more pronounced and entail large hubs of planes collecting and departing those who have passed into the otherworld, then dissipate into lighter flecks.

I have since come to know that this idea of transporting the dead in a very practical matter is not solely my own fantasy. I was recently introduced to the Powell and Pressburger 1946 film A Matter of Life and Death which involves people arriving to their new “life” on airplanes. And the Japanese also favor imagery of Golden Herons representing their loved ones departing into the sky.

[A Matter of Life and Death – aircrew Heaven scene]

I never wanted to muck around in this life of loss for long, wishing to leave all grief behind. It has other ideas for you and returns again and again. This work is for all of you who have also witnessed these departures and continue to feel holes in your heart linger on.