A salute to American originals- George and Mike Kuchar

What,you ask(?)Who are these twin brothers,filmmakers, that are so independent you can’t even find their stuff on video? So influential they foreshadowed an army of underground filmmakers including John Waters, Andy Warhol and David Lynch? How is it so with films from the 60’s titled:The Mammal Palace, I Was a Teenage Rumpot,Hold Me While I’m Naked and Color Me Shameless that they are still virtually unknown? It seems a veritable outrage that the general public can not taste the beauty of their cinematic visions.

(Bring back the Kuchars!)

Lucky enough, I had the chance to catch some of their films at a marathon screening some years ago at the American Museum of the Moving Image. I was blown away by their outrageousness (as good as any John Waters offering!),and bizarre resourcefulness considering most of their earlier films were shot in 8mm and 16 mm on the roofs and streets of the Bronx. Casting themselves and fellow acquaintances as stars, they have left behind a still growing legacy of experimental and avant films. My favorite fact is they are totally into cost effectiveness. Still.

Read an insightful interview featuring both Kuchar’s…on their techniques,their philosophies and musings about their stars.
(From: Essential Cinema:Journal of Independent Film)

George: People are desperate to show their pictures. And there ain’t that many showcases anymore. They don’t know what to do. Horrible.

Mike: What about festivals?

George: You have to pay to get your film rejected.

Mike: I could never understand paying sixteen or twenty dollars to get rejected, can you?

Mike: I never ever did that. I know some people who pay to enter their film and they say, ‘Sorry, we don’t want it.’.

Marc: Have you ever taken a film class?

George: No, you buy those little books.

Marc: Is that ethical?

George: You know what it is, it’s like the name of the class now is, AC/DC Psychotronic Teleplays and we use anything that moves. We grab all the cameras they have. Still cameras are welcome, even if students bring in Polaroid’s.

A peep from the underground- John Waters’ introduction to their book:REFLECTIONS FROM A CINEMATIC CESSPOOL 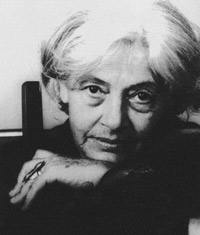 We can accept the unintelligibility of the world, because in the end it is good. It’s good to be alive. The world is happy. We can open the refrigerator and drink a whole liter of orange juice right out of the carton. How delicious is that!
-Adélia Prado

Awhile back (I think more than a year ago)Bomb Magazine published an interview with Brazilian writer ADÉLIA PRADO, which has haunted me for some time now. Recently I have been frantically looking all over my apartment for this said back issue, and I can’t locate it anywhere.

All is fine though,unbeknownst to myself Bomb has kept its magazine on-line and the archives are plentiful.
I do not know much about Adélia outside what I had read in this article,but her approach to her writing is so lacking in pretense,strangely optimistic and full of humility I have been dying for English translations of her work to surface.

I did find Portuguese sites that contain tributes to her writing. Unfortunately, while it’s truly lucky for all of us now that search engines will run translations for you, I’m afraid as they say, a lot gets lost…. I am wary any eloquentness that might be emptied out of the writing. Fortunately Ellen Watson who sought Adélia out for this article has become the English translator of some her poetry. A book titled:The Alphabet In the Park has been published(edit:which I will undoubtedly be seeking out).

At any rate, this is a wonderful interview between two writers. One reason I felt compelled to seek Adélia Prado out again was by the concise tone she speaks in:

“My concern, my obligation is to reproduce the emotion as faithfully as possible. So I write a poem, and then I read it and say, No,that’s wrong, and then I cut it.“

A word of caution for your patience. The Bombsite,bless them,loads rather slowly sometimes, but I recommend sticking with it because I think this is one of those gems.

A little FYI, Bomb’s current issue is up now too and there is a great interview with Wong Kar-wai, whose movie In the Mood For Love, was one of the lovelier cinematic experiences I have had this year.

PS Bomb is also responsible for the discovery of another one of my favorite authors, Jenny Diski, but I will save that for another time.